New Saltiga is built to ‘Break Your Record’ with every piece and point carefully selected to help anglers achieve their fishing dreams.
Made in Japan and bulging at the seams with technology, Saltiga is design excellence like only Daiwa can deliver, and strength and power that only Saltiga can offer.
PROMOTION VIDEO
FEATURES 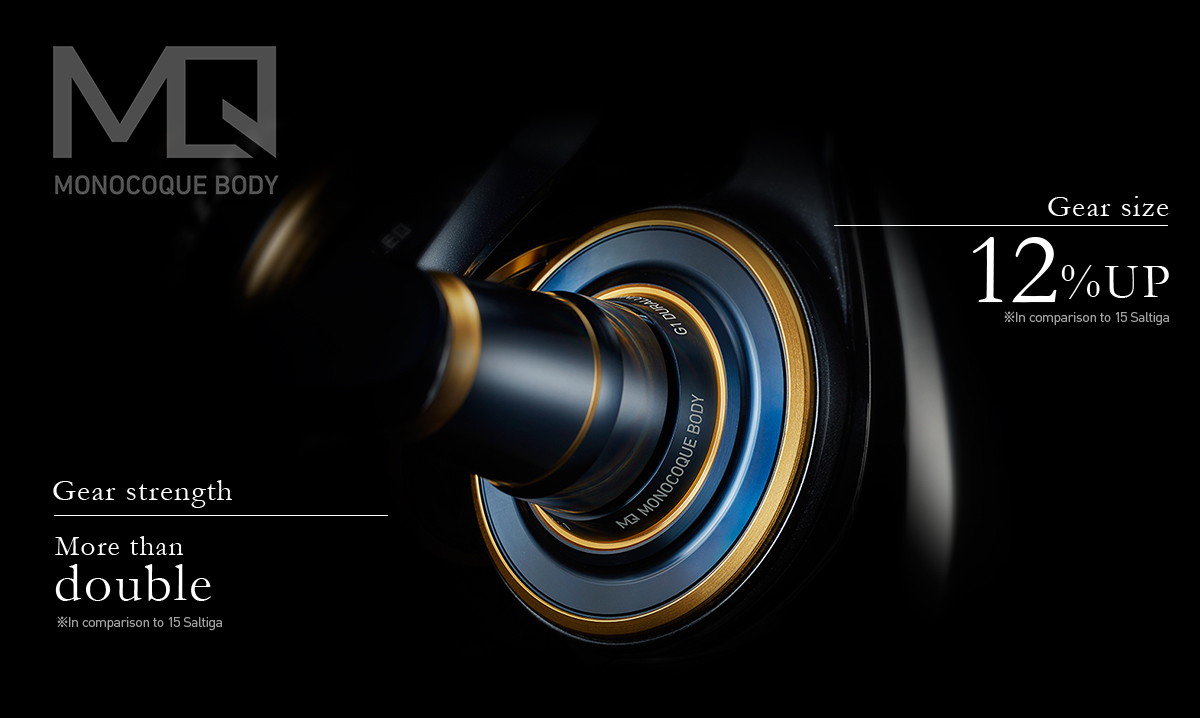 MONOCOQUE (MQ)
MQ body will take Saltiga to the next level
Up until 20 Saltiga, reel bodies consisted of two key elements known as a body and body cover.
The MQ System does not require a body cover instead using an engine plate to screw directly to the body. Eliminating the need for screws to hold a body cover in place. MQ body improves the strength of the reel, it also improves the water-resistance of the body and allows a larger diameter drive gear to be installed.

MAGSEALED
Magsealed reels utilize Daiwa’s patented technology to apply magnetic oil that can change density and shape when a magnetic field is added. When Magseal technology is applied to the main shaft and/or line roller of a spinning reel, it produces a low-friction seal that keeps water, dust and grit from encountering the internal components of the reel. The result is a watertight seal with much lower resistance than rubber type seals.

MAGSEALED BALLBEARING
After a great success of Magseal, Daiwa has decided to install the Magseal system into a ball bearing. By adding the fluid, it creates a magnetic seal within the bearings to support and reduce the amount of saltwater intrusion. Instead of the use of rubber seals, its far more effective and creates smoother spin of the reel. In 20 Saltiga, Daiwa has installed the Magseal bearings on each side of drive gear just like 15 Saltiga. This structure will protect the internals of the reels and eliminate intrusion of saltwater.

MAGSEALED LINE ROLLER
Out of all the components within the reel, the Line Roller takes the most damage from the salt, sand and other elements your line picks up whilst fishing. By adding the Magseal bearing into the line roller assembly, it makes the roller remain smooth and extends its life. The long life of the Magseal line roller bearing system will decrease the amount of line troubles whilst fishing.

ATD (Advanced Tournament Drag)
It is the latest drag technology introduced to drag systems. ATD implements structural changes to the spool metal of the reel that provides greater support of the spool across the entire length of the main shaft. This additional support of the spool reduces spool twist under load, promotes more even pressure on the drag washers and ultimately reduces "pulsing" of the drag when fighting the fish. Implementing a high density woven carbon, impregnated with specially designed grease, the combination creates a smooth and fluid drag across all levels of pressure.

LONG CAST ABS SPOOL
A maximized core diameter and reversed taper mean 100% useable line, with no more "dead" line buried in a deep core. You can fill it with line right up to the edge of the spool lip without fear of tangles. The ABS reverse tapered design causes less casting friction for longer and easier casting.

ALUMINIUM AIR ROTOR
More than twice as rigid. The newly designed aluminium air rotor is more than double the rigidity compared to 15 Saltiga. It is also 50% more durable than the famous original Z series Saltiga of 2002.
SALTIGA TECHNOLOGY VIDEO
BACK