DAIWA has held the same dream for 60 years. To bring to the world, the finest designed reel ever seen. A reel that is so light and easy to use that it feels like an extension of your body. A reel that is so strong that it will withstand the toughest conditions an angler and the environment can throw at it. The dream to create a reel that turns the contradiction of being LIGHT yet TOUGH on its head.

Now, after a long history of innovation, and endless challenges, that dream has become a reality.

Here, for the anglers of the world, is a reel like we’ve never seen before. A reel designed for ultimate performance, joy and angling perfection.

Our Concepts, Mission and Technologies Behind The accumulation of 60 years in a single reel.

With ground breaking designs and technologies, DAIWA has blazed a path introducing new reels to the world.

Over its 60-year history of innovation, DAIWA has remained focused on just one thing: the happiness of anglers.

Blending the skills and passion of Daiwa’s engineers and designers, with the goals and desires of anglers, Daiwa has not just ridden the wave, but has been ‘the wave’ of spin reel design evolution.

Now, in 2018, Daiwa brings to the world most advanced, technology laden spin reel we’ve ever made.

18EXIST. A new chapter in spinning reel history has been written. Our goal? To make a reel like no-one has ever seen before.

The kind that wows people with wonder?

A design that is still yet to be discovered?

What we sought was to achieve the true essence of our goal without compromise. To shock the world with innovation, to be true to our tradition of creating a flagship reel that marks a moment in time, and to deliver to anglers a reel that is unheralded in its purity and perfection.

Inspiration, innovation and limitless research, development, and refinement was embraced and took place over two years to deliver us to where we are now: 2018 and the 18EXIST.

To use a reel that is both LIGHT and TOUGH, has been the dream since anglers first laid their hands on a reel.

In 2018, DAIWA introduced the new concept of creating a reel, that combines the contrasting elements of LIGHT and TOUGH.

The traditional approach when trying to achieve lightness is that it comes at the sacrifice of strength or durability. Even the slightness reduction in weight can have a compromising effect on strength, while the pursuit of durability brings with it its own limitations and implications. Reducing weight without foregoing strength and durability was a complex, expensive task, exclusive to the realm of hyper performance machines such as formula one race cars.

The landscape changed with the introduction of Daiwa’s LT Concept. A concept that allowed Light and Tough to coexist, and Daiwa’s dream to become a reality of bringing both elements to reel design.

To make the impossible possible. The challenge of extreme weight reduction

As a reel becomes lighter, the connection between angler and reel increases to the point where they become one.

An angler can freely move, unencumbered by excess weight, allowing them to fish and perform at their best. The 18EXIST is an amalgamation of multiple subtle technologies and design advancements that allow the weight of the reel to be reduced to its bare minimum, and begins with the MONOCOQUE body.

MONOCOQUE BODY technology enables both compactness and robustness to be achieved. Lean and mean and devoid of unrequired bulk, MONOCOQUE creates an ultra light, ultra strong body without peer.

A redesigned uber thin spool further enhances weight reduction in the feather light 18EXIST, and allows the effortless, functional synergy, between angler and reel to be achieved. The challenge of ultimate quietness

For an angler, silence is golden! Being able to eliminate unwanted sounds, so you can key in on angling cues and sounds, is vital. To help achieve this oneness with your angling environment Daiwa strived to make the 18Exist whisper quiet by significantly reducing rotational noise.

This has been achieved by employing newly developed, TOUGH DIGIGEAR technology. Ultraprecise machining achieves ideal gear teeth surfaces that significantly reduce gear meshing noise during winding rotation. The reel also features a collection of other technologies and designs that reduce noise, including a Zaion Air Rotor that reduces inertia for light and smooth winding, and the sturdy MONOCOQUE BODY that almost completely eliminates gear shifts and rattles.

The 18EXIST has entered unchartered territory when it comes to quietness. The challenge of a longer cast

As anglers, we know the longer a lure is in the water, the greater the chances of it crossing paths with a fish. Making a longer cast is one of the most effective ways of increasing your lure’s time in the water. Spool design is one of the biggest factors that influences casting distance, and now, 18EXIST breaks new ground with its Long Cast (LC) ABS spool.

Casts are easier, longer and more trouble free, thanks to the new innovative spool design. Line comes off the reel easier and faster, allowing for longer, more accurate casts and improving angling performance.

Distance is the name of the game with the 18EXIST. 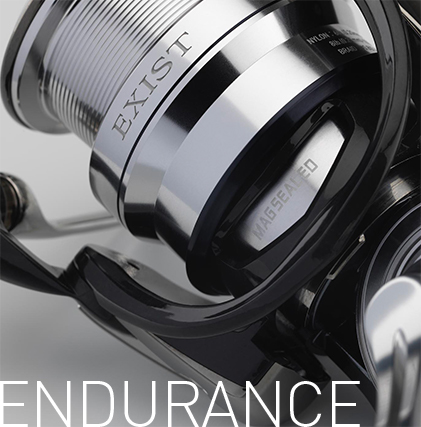 The challenge of ultimate durability

Creating a reel that performs at peak performance over a long period, is the quintessential definition of ultimate durability. Reels of the past have fallen short in this area, and have waned in performance over time, when subjected to prolonged use and environmental conditions.

The search for the holy grail in protecting and maintaining performance was found with MAGSEALED. The 18EXIST is equipped with MAGSEALED technology, to protect its line roller, main shaft, and drive gear shaft, and now combined with the use of the seamless MONOCOQUE BODY technology, greatly reduces the penetration of water and dust into the reel to minimise corrosion and promote longer life and better performance.

By thoroughly and steadily implementing technologies one by one, EXIST has achieved ultimate durability.

The three pillars of perfection The drive gear is the most important part in the reel, and there is a trinity of elements that are essential for it to function (design concept, processing technology, and gear materials).

The drive gear used in the 18EXIST is the TOUGH DIGIGEAR, a further evolution of its predecessor DIGIGEAR II, and our most advanced spin reel design technology to date.

TOUGH DIGIGEAR is our brand new digitally designed, machine cut gearing system, that ensures ultimate gear precision, rotational smoothness, and strength. Integrating the analysis and calculation of minute details, such as the impact and tolerances of gear meshing, and the impact of forces during the meshing phase, results in gear design and performance that is without peer.

The design ensures silent gear rotation and precise angler control and feel. The gears are made from ultra strong Duralumin, which has high tensile strength and exceptional durability.

TOUGH DIGIGEAR is an evolution in gear design, performance and strength, and the unbreakable heart of the 18EXIST. The history of spin reel design was built on a two-part housing approach that involved the body and the body cover. Released in 2016, MONOCOQUE has shattered convention and changed this way of thinking.

In the MONOCOQUE design, the body itself is a rigid frame, durable to twists and bends, yet compact and spatially efficient. MONOCOQUE design is used in rocket and formula one vehicle design where durability and space efficiency are paramount. In a spinning reel, containing over 150 parts within a small compact body, the benefits of a MONOCOQUE structure are immense.

By eliminating the need for screw space, the drive gear was expanded to its maximum size relative to the dimensions of the body. Now, the body could hold a large-diameter drive gear that covers around 85% of the body’s surface. In other words, bodies of the same size as before were able to house much larger gears, or if the gear size used were the same, then extremely compact bodies could be created. The introduction of a MONOCOQUE body in the 18EXIST allowed us achieve our lightest weight design ever. MAGSEALED is a revolutionary system that involves a membrane of magnetic oil, in conjunction with magnets between the body and the rotor of the reel, which greatly reduces the penetration of water inside the body via the main shaft. Being magnetized this lubrication system avoids any friction, reduces dust intrusion, eliminates oil spray and improves reel life expectancy.

Introduced in 2010, this groundbreaking technology has also been used for line rollers and ball bearings, and provides an unprecedented level of durability and protection to reels, to significantly reduce the occurrence of reel repairs and maintenance.

The 18EXIST features MAGSEALED on the pinion shaft and line roller, while both ends of the drive gear feature MAGSEALED ball bearings.

18EXIST is built to withstand whatever nature and the angling elements have to throw at it.

Daiwa protects your investment with an exceptional plan for our EXIST reel owners. When purchasing your new EXIST you will receive the finest warranty and experience in the industry. Listed below are the warranty incentives exclusive to your EXIST purchase.